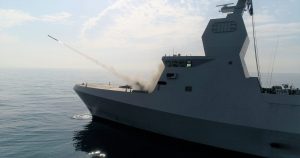 Earlier this year, Rafael Advanced Defense Systems alongside the Israeli Navy and Ministry of Defense Directorate of Defense Research and Development (DDR&D) successfully completed a series of tests on Rafael’s C-GEM naval system.

This latest test series, conducted by Israeli Navy crew members, included launching C-GEM decoys from an Israeli Naval Ship (INS) Sa’ar 6 corvette to demonstrate C-GEM’s ability to counter multiple advanced threats. As a result of these tests, Rafael’s C-GEM decoys will be integrated into the Sa’ar 6 multilayered defense array. Now, not only will C-GEM act as another effective soft-kill defensive layer, but it will also complement the C-DOME hard-kill defensive layer.